Yup, I've stuck my toes into the water, and am having a little splash around with Lithuanian.

(Already I can see I'm going to need to learn how to use diacritics and stuff if I want to blog properly about this, because that 'u' in 'jus' should have a line above it. Help?)

I'm using a podcast series called Lithuanian Out Loud and I'm just going to go right ahead and compare it to Say Something In Welsh because - well, my opinons and comments about this series only make sense in the context of having done SSiW, I think. 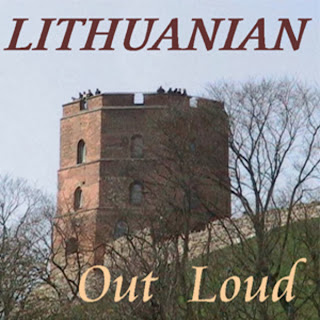 I'm still going to use Lithuanian Out Loud as my base for learning Lithuanian - it's an extensive course that continues to have new lessons added, so that's pretty awesome. And because LOL follows a more common language course structure, I'm going to do it with a critical eye, see what I like, see what I don't like - that's good information there, I think, for teaching languages.

But I'm going to add some extra elements that I've found really helpful for learning Welsh (and which aren't actually part of SSiW either). I'm going to do my spaced repetition cards for practising vocab and stuff on the fly (because I just like them), and I'm going to tee up some conversational practise for Lithuanian much much sooner than I did for Welsh. I think it was seven or eight months before I had a real conversation yn Gymraeg, and it made such a difference. I might not go for the 'speak from day 1' approach exactly with Lithuanian - I still want some vocab and structures under my belt first - but definitely no more than two months, say?
No comments:

Then this is what we should aspire to be – an unstoppable force running like a nutter through the streets of Aberystwyth to the sound of Genod Droog."

Generally people say that learning your third language is a lot easier than learning your second. I guess there are a few reasons for this: better understanding of language structure, gained experience in how to learn another language, and increased confidence, for a start.

I totally agree with the first two reasons but I have a few quavering doubts about the third, “increased confidence”. Like definitely when you’re just starting to learn a second language, it's like staring out at this vast ocean and you have no idea how to navigate it or how long it will be before you get your feet on dry land and is your boat even seaworthy? You know.


When you’ve got a fair bit of your second language under your belt, though, it’s like “oh, okay, I've learnt how to row and I can see land and being able to hold a conversation in another language is actually possible.” So that’s a confidence booster, right?

Thing is... I know how hard I worked to get my Welsh to a stuttering, faltering, just-about-able-to-have-a-conversation level. Like, I worked hard. I mean not Benny the Irish Polyglot hard but at the point where you're doing two or three hours a day – including lessons, listening to the radio, watching a bit of Welsh telly, and reading the news in Welsh – it's super fun but also mentally exhausting.

Learning a language is possible, it’s worthwhile, and a lot of the time you feel like a horse in a glue factory. I'm not exactly sure I have increased confidence here.

So I’m standing on the beach, staring out at this expansive ocean of Lithuanian (I probably won’t push this analogy much further, don’t worry), and I know I can manage it, but also it’s nice to feel steady on my feet, and I want to rest here a bit more.
No comments:

I've been living in my new place, my own place, a place of my very own, for nearly a year now. So I guess this post is a bit of an anniversary look back at my relationship with stuff. But it's almost Christmas as well, which always gets me thinking about these things.

I don't know what Christmas is like where you are but I suspect if you have the internet connection to be reading this then you have some idea of how Christmas and Stuff are convoluted.

Which is funny because I don't know any one single person over the age of about eleven who really enjoys presents and the mental effort of thinking what to buy for someone who has everything and having the chance to fit fifteen new things they themselves may or may not want into their home. And yet there you are and there I am at "the mall" with everyone else a weekend or two before Christmas, trying to buy the least crappy presents we can come up with.

(As an aside, I stood through a brilliant and enthusiastic demonstration for some body lotion + nail buffer set yesterday afternoon and then had to explain I didn't want to buy it because I already own body lotion and I like my nails the way they are and I'm not actually going to purchase anything because I don't like stuff. Poor lad was just trying to do his job.)

This isn't going to become a post about the true meaning of Christmas, although there is that. But regardless of your beliefs, hasn't Christmas become such a retailers' conspiracy?

Anyway I think I've been pretty good about not Buying Stuff this year because my place is so tiny there isn't anywhere to put it; and there is definitely a sense of smug self satisfaction (hello, alliteration) in feeling in control of what comes into your home and staying on top of it.

The Tiny House movement has interested me greatly, because it has this near total clarity about the relationship between the physical structure of your space, what you put in it, and how that affects your life. That's something I want to blog more about, and I'm slowly working through other people's blogs and I'll add the ones I like to my sidebar.

In the meantime I recommend anything by Kirsten Dirksen on youtube. She produces great videos about lots of different things that I find inspiring; here's two for starters.

I'd love to build my own tiny house like Jay Shafer's one day, but in lieu of having no building/construction skills whatsoever, I'd be more than happy to live in a tiny partment a la Nicole Alvarez :-)
No comments:

Let's do this thing.

Our emails and e-calendars are down at work. Do you know how dependent we are on these? I literally don't know what I have scheduled for this afternoon and I can't continue on with work for clients because all the information is in my emails.

So, a quick blog post. Quick is good. Do it, get it done, rip it off like a band-aid.

I've been thinking about when I'm going to change, I mean really actually change, my life - work with a different organisation or work in a different profession altogether or whatever it is. The date I usually come up with isn't even a date at all, it's just "oh, vaguely by the end of the next year sometime probably."

Thing is, my contract is up in April.

So why not do it in April?

That's three or four months after Christmas - plenty of time to update my CV, do my electives, get a British passport (if necessary), get the leak in the shower fixed, rent my place out, work out what to do with my car, get a job lined up and just go. 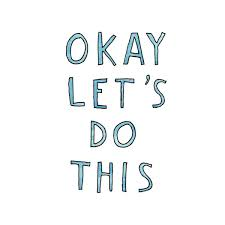 I X-post (+ extra) at amybuzzlightyear.tumblr.com